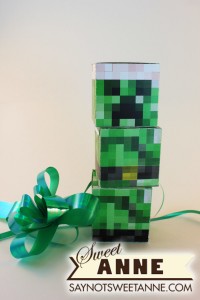 Alright I admit it. I’m a bit of a nerd. My Husband works in IT- I spend my whole day on a computer doing Graphic Design- and just this week end I broke out a 20 year old DOS based game (Tim Sweeny’s ZZT) just to remenisce. And if you don’t understand that last part- all the more proof of my nerdiness.

So, its no surprise that I’ve had a Minecraft (Read: Indie game that works like legos with with fighting.) account for years. More recently, however, the game has exploded in popularity and both of my younger siblings, as well as many of my adult friends are playing it. Since the game is based on cubes with textures on all sides, it wasn’t a stretch for me to decide to make one out of paper. After Googling, I discovered that I’m not the only one to come up with this idea. There are numerous paper craft downloads of Minecraft characters and monsters. Including this Creeper made by CubeCraft.

I, however, was looking for something more gift-box like. Something that could be opened and closed, and didn’t have small parts or require a lot of glue. Here is what I came up with! I hope that you like it! The Santa Claus Creeper can be downloaded from my Etsy Store.